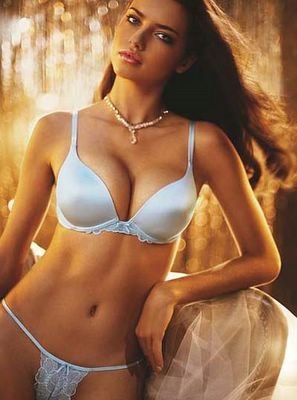 A gratuitous picture of Adriana Lima. A picture of Adriana was requested by my friend, co-worker, and avid David Kim Show fan, Mike D. He wants to marry her, because she's reportedly a virgin. She is going to be Mike D's future ex-wife.

But hey, would you guys rather see pictures of her and other hot beautiful girls or pictures of me? My blog isn't really about hot women (other than my wife). Lately, it's about my very funny movie reviews, hilarious jokes, funny pictures, and Xtreme downhill lugeboarding.

Mike D is under the impression that she is. How dare you question the chastity of Mike D's future ex wife?!!

LOL...I just don't see many virgins posing like this. With what she's wearing, we can almost find out for ourselves if she's a virgin or not! :D

I just don't want to ruin Mike D's dreams of her being a virgin.