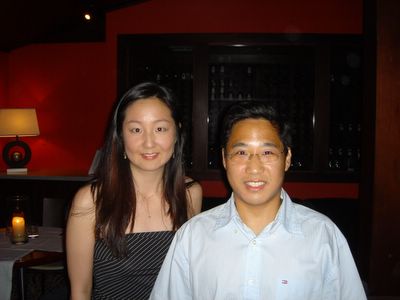 I took a picture with Laura, the belle of the ball and the life of the party.

It's good seeing friends from college again. College was one of the most fun times I've had.

Chris and his homeys 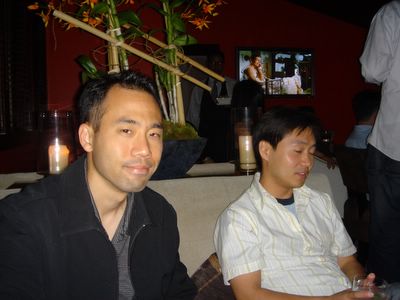 Chris and his buddies, Joe and Matt, were a little camera shy that evening. Chris tries to fake a smile. Joe pretends he's asleep. Matt manages to avoid the picture completely. 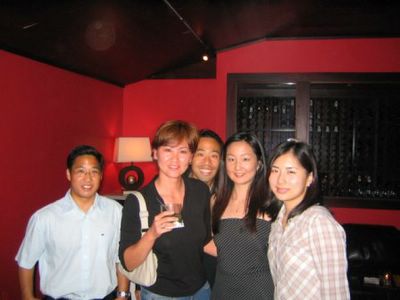 More pics from Laura's party. Man, Chris looks a little too happy in this pic. This picture was provided courtesy of Laura.

As you can see, my site is a work in progress. I'm adding new junk all the time, so check back often. I'm working on making it more and more better. I'm going to try and make it funnier and more interesting. Some of my humor may be offensive to some people. To them, I say chill out. I keed, I keed. I joke with you.
Posted by David Kim at 11:58 PM No comments: 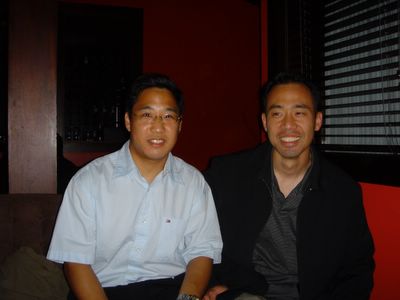 Chris and me at Laura's party at Meson G's. He's the best homey anyone can have. He's also The best young dentist in town. Check out his neck area in this pic, though. It looks like one major tanline. Man oh man! I keed, I keed. Try to take a little joke. 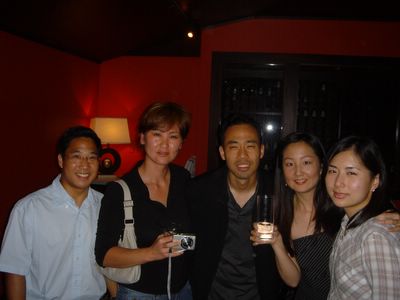 Here's Unkyu, Chris, Laura, and Stephanie. These are just a few of the several dozens of friends that came out to congratulate Laura on her recent bar passage. Now, she's going to be a fearsome female attorney. This took place on Saturday, May 28, 2005 at Meson G's on Melrose. I arrived at Laura's party late because I was waiting for Chris and his buddies, who wanted to arrive fashionably late. Earlier that day, I watched a double feature of Star Wars and Jet Li's movie, Unleashed, with my other buddy, Seung ("Joshik"). After the movies, I went to Chris' place and we wasted a bunch of time there. Chris spent a lot of time picking out what to wear for the party. I had to leave Laura's party early because I didn't want Sarah to wait up for me.

This is one of my favorite Star Wars fan films. Star Wars Gangsta Rap S.E. is awesome and pretty funny. I like to sing the lyrics from time to time. My church kids think the song that I sang to them was "tight". It's a pretty good animated film too.

Here's the link you can cut and paste or you can click on the Title of this Post. Then, when you get to the link page, click on Watch Film on the left side. When it loads, press play. It's definitely worth the 2 min or so loading time.

The force was weak with all the other Jedis that died off. They got killed way too easily. I thought Jedis were supposed to be tough to defeat. Apparently, the alien Jedis in Episode III sucked.
Posted by David Kim at 4:13 PM No comments:

For those of you who can't get enough Star Wars, here's a link to the Lego version of Star Wars: Revenge of the Brick:

It's cute and clever. It's a little different than Episode III.
Posted by David Kim at 3:49 PM No comments:

Here's a link to an old but still hilarious clip of Triumph the Insult Comic Dog pooping on Star Wars Nerds lining up for Star Wars Episode II: Attack of the Clones. You can cut and paste this link or click on the Title of this Post. That Dog cracks me up.

Watch it and see the hilarity for yourself.
Posted by David Kim at 3:29 PM No comments: 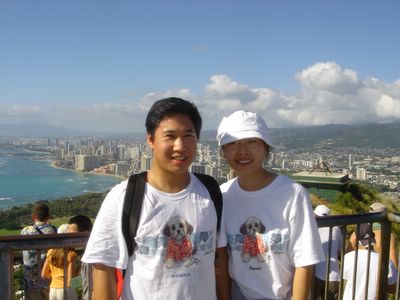 Yet another Hawaii Honeymoon picture. This is on top of Diamond Head crater overlooking Waikiki. You can check out all the pictures I've saved on my Yahoo Photo Album with this URL: http://pg.photos.yahoo.com/ph/davidmkimlaw/my_photos

If it doesn't work then let me know. I'll email you the invite to view my Yahoo Photo Album. That always works. You can view almost all the pictures that I've taken with that link. Maybe, I should have just used that instead of flickr.com. Oh well. Anyway, I love that Baby Pepper T-shirt.

Seal Beach. A long walk to the water. 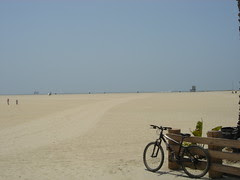 I've made it to Seal Beach. I feel like I can bike all over the world. Click on this picture, name of the picture, or my name below to see some more of my pictures on my second flickr.com account. I've made yet another flickr account because I've used up my upload limit on my second account too. Maybe, I need to save my pictures with lower resolution to use up less space. So far I have 3 flickr accounts. I'm sorry the pictures are out of order. I blame it on flickr.com. This one is on www.flickr.com/photos/darthdavid/ 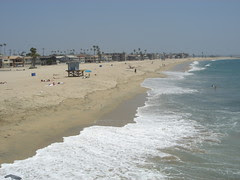 I wish I could bike up and down the entire Pacific Coast. You can click on this picture, the name of the picture, or my name below the picture to access my third flickr.com account. The URL for the third account is www.flickr.com/photos/davidmkimlaw/ 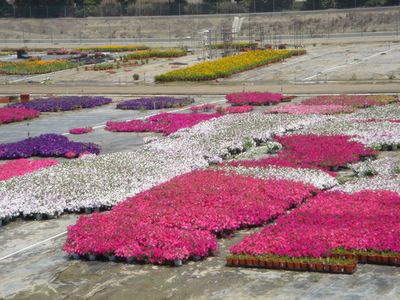 Biking by some flower beds along the bike path. Sarah loves flowers. When we get a house, our garden is going to be full of flowers, plants, and trees. 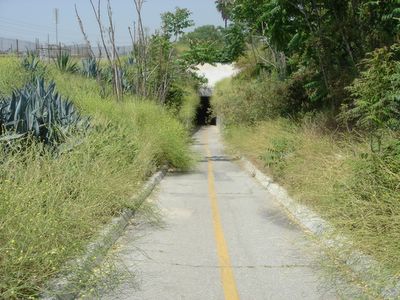 I had to go through a lot of these scary tunnels. They're pretty fun to go through actually. It's kind of like going on a roller coaster. Watch out for bridge trolls. 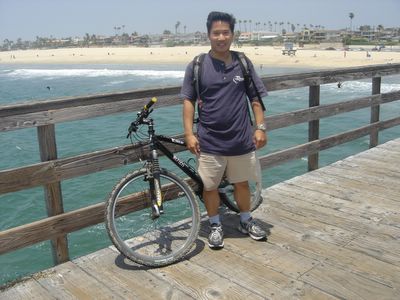 I had a friendly fisherman take a picture of me and my bike on the Seal Beach Pier. 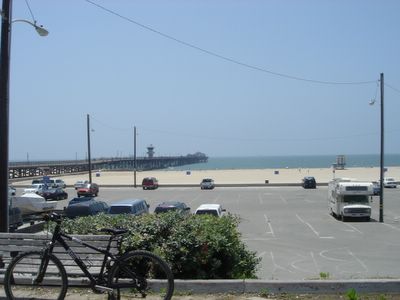 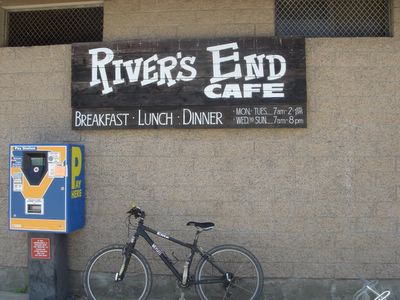 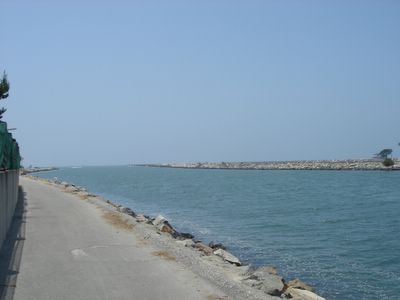 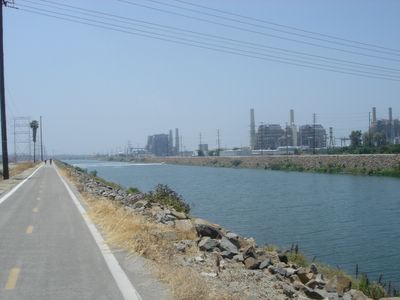 The ride to Seal Beach was another great epic and scenic ride. 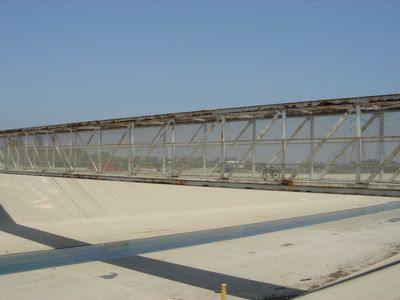 Bridges of Los Angeles County. Can you see my bike? My bike is in the background of every picture. You have to look hard to find it. Just kidding. Anyway, thanks to Andy Nagai for showing me the path to Seal Beach. It's a great road bike ride. It's part of the same bike path system that I used to go on my previous road bike trips that I've written about below. 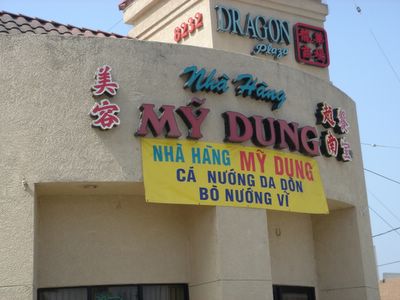 I took this on 5/25/05 on my bike trip to Seal Beach from my place. It was another ride that was over 65 miles round trip. Anyway, what were the restaurant owners thinking? My Dung?!! I'm never going to eat at that place. I'm suprised this restaurant even got a "C". Like I said before, people need to conduct some market research before they finalize the name of their business. This place sounds just as bad as that Vietnamese Pho place, "Pho King".

Mothers are against everything these days. I love violent videogames. I admit that I'm addicted to videogames. I want to stop, but they keep making them better and more fun. It's impossible to stop. 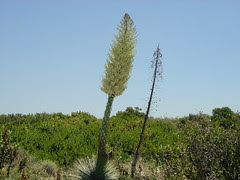 Interesting Desert Plant/Tree
Originally uploaded by David M Kim.
Although I don't know the name of this plant, it's pretty cool. If you know the name of it, let me know and I'll post it up. There are a bunch of these near the Santa Fe Dam Nature Center. They're pretty tall. Anyway, I uploaded this picture to a new flickr.com account since I've used my entire bandwidth on my other flickr.com account already. My new flickr.com account is: www.flickr.com/photos/darthdavid My first flickr.com account is www.flickr.com/photos/davidmkim You can click on this picture or links below the picture to see more pictures of my bike trip that I've uploaded. This way I can share more pictures without using too much of this blog site's space. Flickr.com only lets me upload about 20 megs a month. Otherwise, I would have to pay for an upgraded account. Forget that.
Posted by David Kim at 2:20 PM 2 comments: 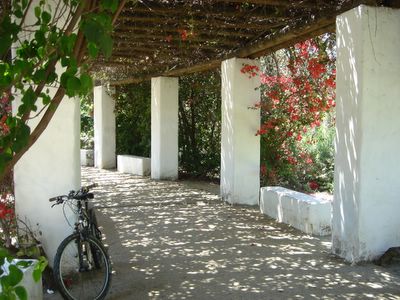 Resting at the Bosque de Rio Hondo on my way back home. 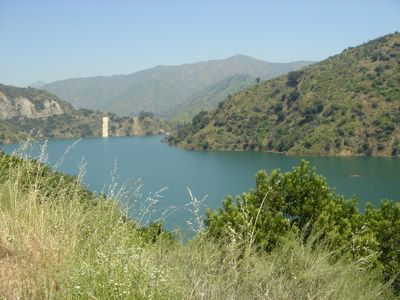 Crystal Lake. I wish you could have been there with me to experience this great bike trip. It was a fantastic ride with lots of great things to see. 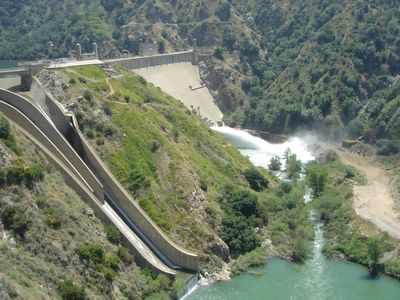 Water rushing out from the Miller Dam. At this point, I have major saddle sore. I thought I would be young and healthy forever. I just can't believe things go downhill so fast after you reach 30. At least I still look and act young. I wonder how long that will last. 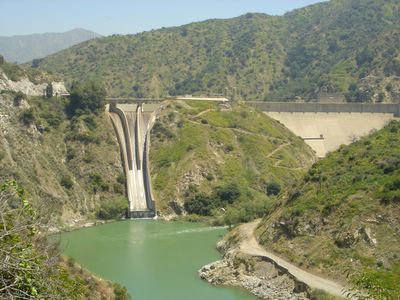 The Miller Dam. I finally reached my destination. At this point, I'm out of energy. It's a good thing learned my lesson from the last time I rode here last week. I brought snacks to eat and lots of water. The healthier the snack the better, but anything will do at this point. Now that I'm over 30, I'm not in as great shape as I was before. It's tougher now. In my 20's, I just rode up with no problem. I didn't need to bring any snacks. Now, I'll run out of gas and be in a lot of pain on the return trip home. The funny thing about biking is that you keep continuing forward because you're having so much fun. Once you turn around to go back home, you feel really exhausted. Now that I'm old, I get sore all over. Even my balls get numb after a long ride. It's much more difficult now that I'm older, which is why I need even more discipline to work even harder. 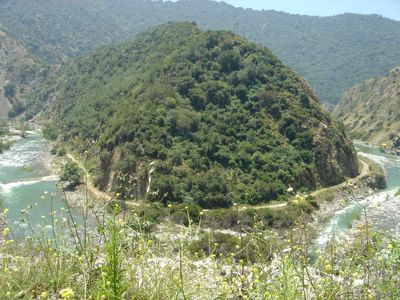