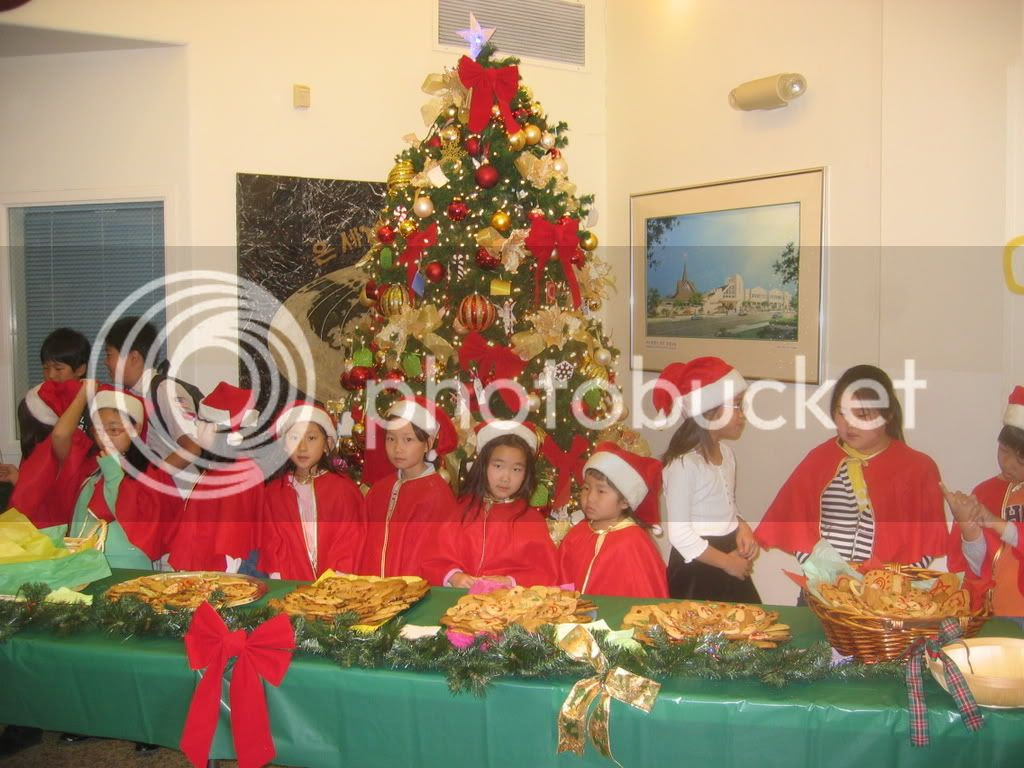 The BSBC Kids worked hard to bake thousands of cookies to pass out to people for the Sunday services. They also sang angelic xmas carols.

You can click on the picture to see other pictures on my photobucket site.
Posted by David Kim at 7:08 PM 6 comments: 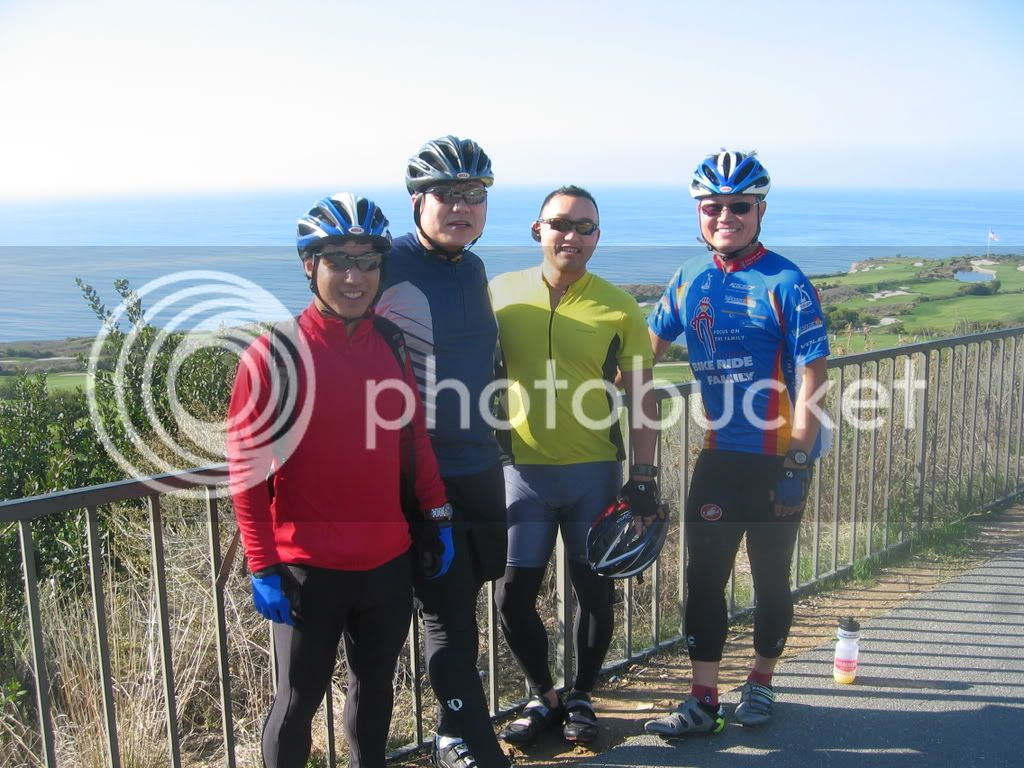 Click on the picture to see the entire photo and to see other pictures on my photobucket pile.
Posted by David Kim at 6:57 PM 2 comments:

Sorry my blog hasn't seen too much action lately. I've been either too busy, lazy, or have been leading a boring life. Perhaps it's been a combination of all three of those things.

I've been way too behind in my blogging (among other things) to remember what to blog about, but I do want to update my YN Cycling rides.

It's been really chilly in the morning. I put on my long sleeve jersey and cycling pants, but it's still cold. When I wake up before dawn, it's been in the 30s. However, just after a few minutes I start sweating from cycling. I've also been running to church too. My legs are getting stronger too. I've been getting to church faster and my legs don't hurt as much after the half-marathon distance run to church.

All the rides have been fabulous and very scenic. I made my personal best in terms of distance was the ride to Malibu. I rode 141 miles that day. My second longest ride was 120 miles. I made myself ride a lot more as training/punishment after the Montrose Pro ride. In that ride I was disappointed in myself for not keeping up with pro and amateur racers. Now I believe, I'm in better shape and am more experienced enough to keep up with them.

I ride to all the bike rides to get in a lot more extra miles. Malibu is a huge area that is about 20 miles long along the Pacific Coast Highway. From Malibu we rode past Port Hueneme almost to Oxnard. Then, we started heading inland to Camarillo and rode along the strawberry fields.

We always have pretty good lunches afterward. I totally pigged out after the ride to Tujunga. We had a big uphill climb that wore all of us out. I had a extreme huevos rancheros lunch that was probably 2000 calories or so. But, I felt I was entitled to pig out since I burned so many calories. According to bicycling.com's calorie counter, I burned over 8000 calories riding at race pace for 8.5 hours.

I still need to keep my eating under control. I think I gain weight since I get so hungry from exercising. Hopefully, it's muscle instead of fat that I'm gaining.

If I keep my overeating at bay and cycle more, I should be unstoppable. I need more self-discipline though.
Posted by David Kim at 11:40 PM 4 comments: 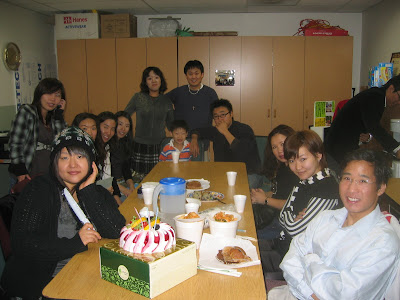 This year, I had a computer virus on my birthday so that basically sucked. I spent all day trying to get rid of it. Then, I had to reinstall windows and reformat the hard drive. That still didn't work, because I needed unpartitioned space on my hard drive. I had to get Hyukky to help me fix it.

Well, at least I did get a birthday cake from my Sunday School Co-Teacher, Jun. We also celebrated Soo Jin's (Christina) birthday as well, which was on December 15.
Posted by David Kim at 7:17 PM 4 comments: 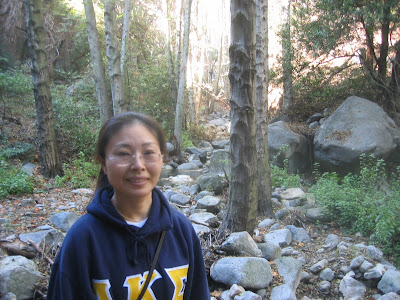 On Thanksgiving Day, we went to church for the Thanksgiving Day service. We led the church kids to memorize a couple bible verses and Jenny Teacher, DDS, led them in a couple of praise songs in front of the main chapel service. I think the kids liked it, but one kid asked, "Aren't the adults tired of watching us up on stage so often?" I thought that was hilarious. We had a Thanksgiving Day lunch at church.

Then, we went to my sister's house and we had Thanksgiving Day dinner there. The food was delicious. Ben, Saejin, Saewoon, and my mom were also present.

Learning from previous Black Fridays, I did not go anywhere near the mall or Fry's Electronics on Friday. It's just too crowded, and they only have a very limited amount of the advertised deals. Plus, there were some people that got killed during Black Friday fights and stampedes. Now, it's dangerous shopping on that day. We need a new laptop and desktop computer, so we're hoping on getting in on some better deals as Christmas approaches. I'm betting that there will be bigger and better deals since the economy is getting so bad.

On Saturday, we went hiking in Arcadia with Christine, Saewoon, Grace, Saejin, Ben, and their dog, Destiny. I've never seen it so crowded there before. People were fighting for parking spaces like they were in a shopping mall on Black Friday. We hiked for 3 hours or so, but we didn't get to see the waterfall this time. I think we'll go again next time. It was still a beautiful hike on a beautiful day in a long time, after the rain the previous weekend, and the wildfires 2 weeks ago.

Sarah and I bought an all in one printer at Office Depot and then bought another one in Garden Grove.

On Sunday, I gave my Sunday School kids an exam on Exodus. I told them that I would test them, and I meant it. I think I am going to give them tests more often since they seem to be quiet when they're taking tests. We're giving out tickets for prizes as an incentive for good behavior now as well.

Man, the stock market went down a lot today. It was the 4th steepest point loss in Dow Jones' history. This was after news that the U.S. has been in a recession since December 2007. I knew we were in a recession since last year. Didn't we all? The economy has been bad for a while now. I guess now it is official.
Posted by David Kim at 6:46 PM 4 comments: