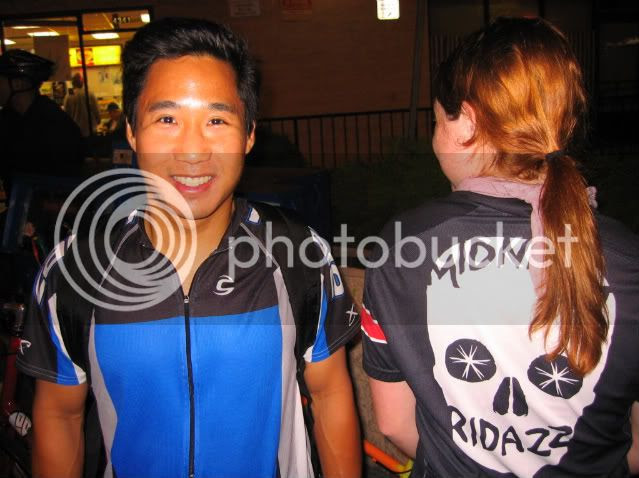 I went on the Wolfpack ride this Monday at 10:00 p.m. This is a very fast paced race-like ride through the streets of L.A. in the middle of the night.

I took a picture here with Steph from the Team Midnight Ridazz ALC. There are more pictures linked to my photobucket account if you click on the photo.

We rode almost 50 miles that night. Unfortunately, about 20 minutes into the ride, one of the riders got hit by a car. That's what happens during these fast paced rides. Some cops, firetrucks, and ambulances came to the scene. He got taken away by ambulance to a hospital since he had a lump on his head and was bleeding even though he had his helmet on. I think he'll be okay though.

There were over 30 riders that night. The ride was still fast since there was John, the California State road bike champion who regularly attends along with some other racers. This time, the ride was a little easier to finish since there weren't as many turns as our last ride. I think everyone was able to make it to all the checkpoints. Last time, I had to frantically keep up with someone who knew the directions to the next scheduled stop. If I didn't I wouldn't have been able to finish the ride.

We rode from Hollywood to Westwood. Well, we did have an unscheduled stop due to the unfortunate bike accident one of our riders went through. After he was taken away by ambulance, we kept on going to our next stop in Westwood. Then we rode over to the Venice Beach pier, went to the Walt Disney Concert Hall in downtown, and then back to the doughnut shop on Sunset Boulevard.

We finished at around 1:30 a.m. I had to bike back another 18 miles back home. I got home around 2:30 a.m. Then, I had to shower and make lunch for Sarah and me for the next day. By the way, washing dishes and making lunch takes a long time. I wish I could find ways to cut down on cooking time. I finally went to sleep after 4:00 a.m.

I totaled 92 miles on Monday after a full day of work, volunteering at church to help prepare for VBS, the Wolfpack ride, and 2 hours of sleep.

Maybe next time I'm going to leave the Wolfpack ride a little earlier. It's way past my bedtime. I was a little concerned about how I'd do on Monday's ride since I've been putting a lot of miles on my legs recently. I was already sore before the ride. After riding with other people, it was so fun I kept going. I already feel faster since I started riding with the Wolfpack.
Posted by David Kim at 12:11 AM 2 comments: 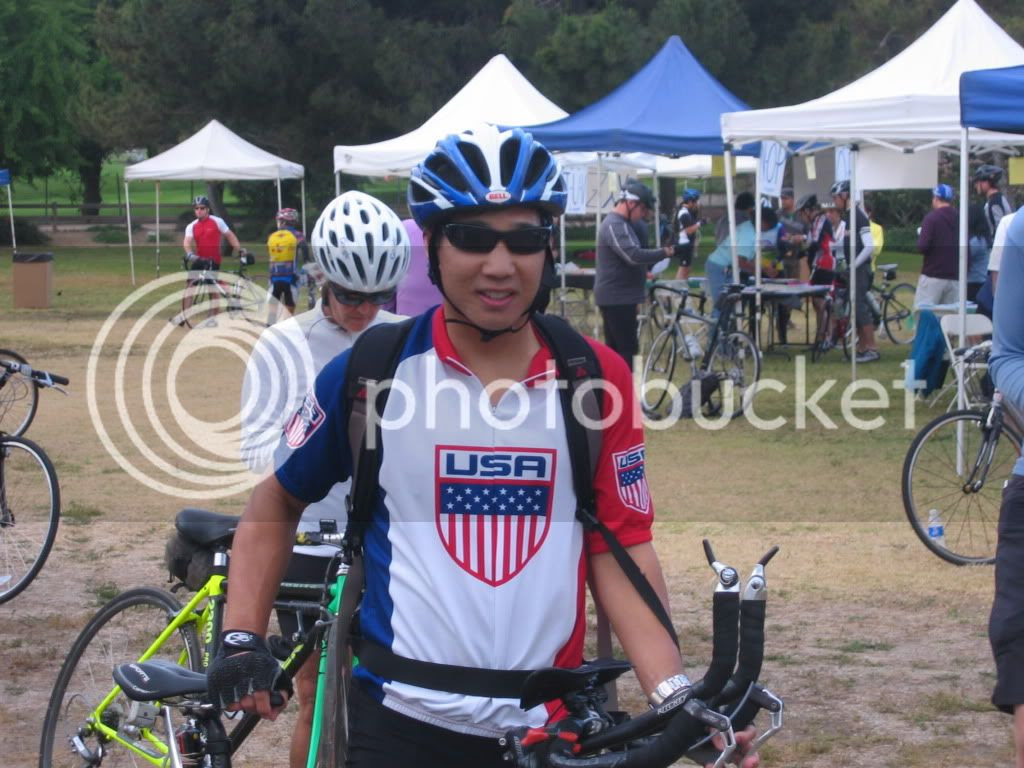 It was a fun ride. There were a lot of riders who showed up. It's always fun to ride with lots of people....Makes for a lot more people to pass. It always feels good to pass people. It makes me feel like I'm fast.
Posted by David Kim at 1:18 AM No comments: 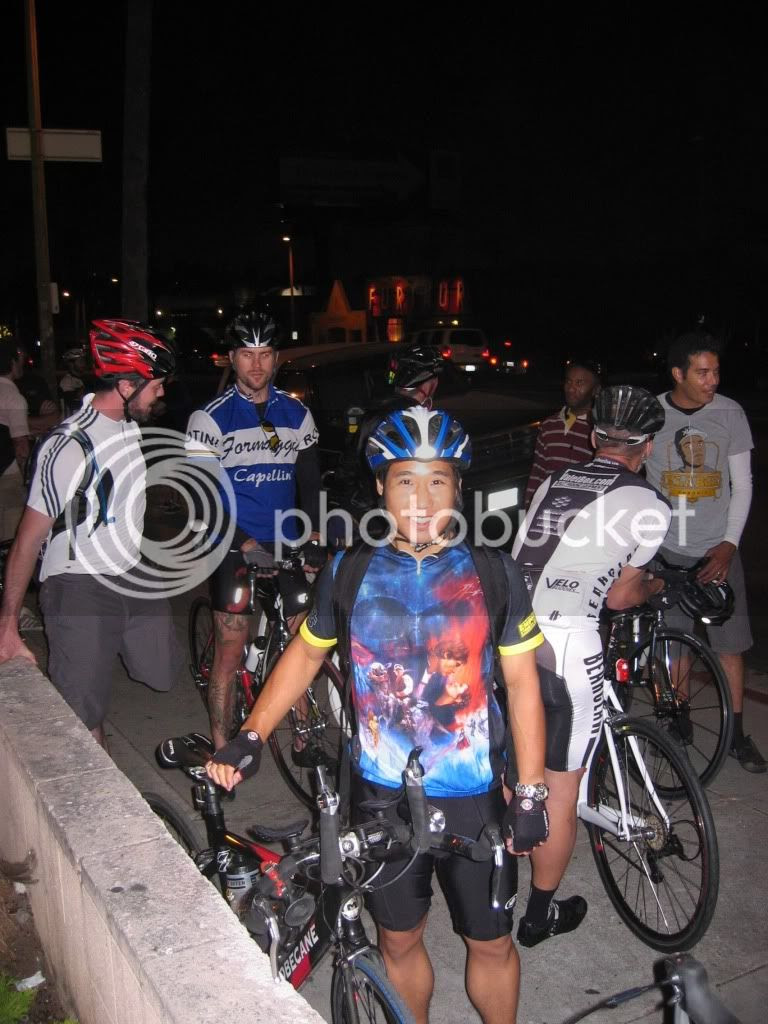 I went to ride with the Wolfpack Monday night at 10:00 p.m. I got my ass schooled. This was the first time I've been on this ride in nearly 2 years. The last time was in October of 2007. There's a post I made about it last time in my Archives.

I thought this ride was fast last time. Things have gotten much more fast and furious this time around. A couple of years ago, it was mostly guys on fast track and fixed gear bikes. Now, it's been taken over by mostly road racers. They've taken it to a whole new level.

This ride is a very fast paced ride. Think of Fast and Furious on bicycles and you get the type of racing we do. I'm not kidding. There were 4 stops. The stops were a little long though. We waited for some riders to make it to the stop. We kept losing people. I think we started with around 30 riders and only half were able to finish. I was just barely hanging on. The only reason why I didn't get totally dropped was because I was following right behind guys who knew how to get to the next check point. If I fell behind, my ride would have ended right there. I can't see street signs very well, much less at night. Plus, I can't keep track of all the turns when the route is announced. There were a lot of cops out that night. One of the riders got pulled over. These guys just don't stop at lights. It makes it nearly impossible to keep up if you get caught at the light in a big intersection. You've got to spin as fast as you can and just pray you don't get dropped. This ride is not for the faint of heart. We pass cars going downhill and we don't stop for anything.

We went through a lot of L.A. neighborhooods like Hollywood, Koreatown, Griffith Park, Los Feliz, the Convention Center, and Silver Lake.

Why do I put myself through this type of punishment? Because it's fun, thrilling, and I want to keep pushing myself to become a faster rider.

I can't wait for my next ride with the Wolfpack, but these wolves ride at way past my bedtime.
Posted by David Kim at 2:04 AM No comments: