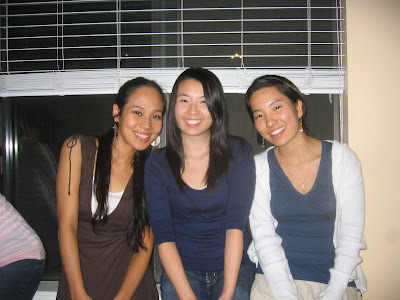 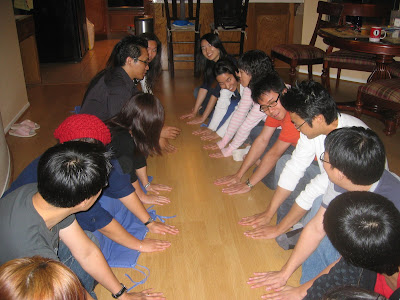 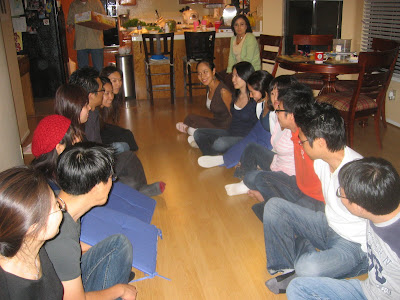 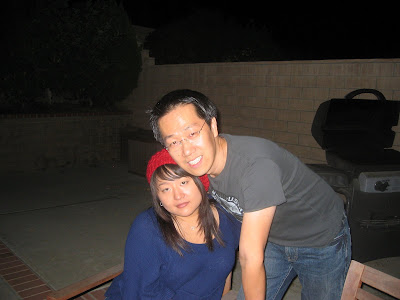 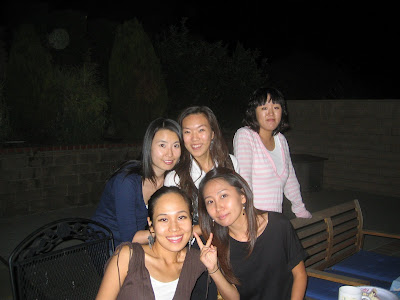 We had a bbq fellowship dinner for the teachers at BSBC church at Eun Jung and John's house. Everyone seemed to be really hungry especially since the Korean BBQ Calbee (Kalbi, Galbi, however you choose to spell it) was so good. In fact, I was so busy eating, I forgot to take pictures earlier in the day.

After everyone was stuffed from eating the delicious triple berry cheese cake, we played some games. As the fellowship director, Pastor James appointed me as the Game Master. We had fun playing a few games such as Smackers, Tell me, tell me lies, and Never Ever Have I.

In the morning I ran to church again. My legs and feet were hurting, especially my left foot. I was running on the concrete sidewalk for almost 13 miles. I think the slants in the sidewalks whenever there were driveways, were affecting the way my foot landed. My foot was landing a little bit at an angle. After thousands of those footsteps, my foot really began to hurt. Plus, I only slept an hour the night before. I was so tired, I couldn't think straight. When it was my turn to do QT quiet time sharing, all the wonderful things I planned to say turned into crap. I couldn't remember a thing, and everything I said sounded dumb.
Posted by David Kim at 8:37 PM 2 comments: 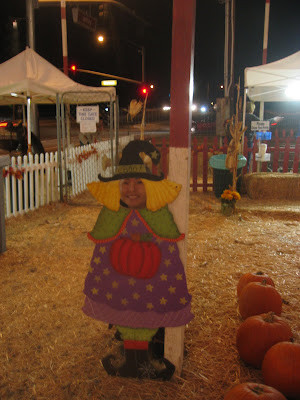 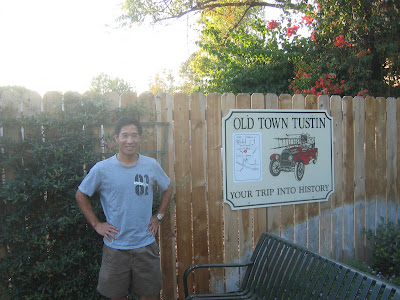 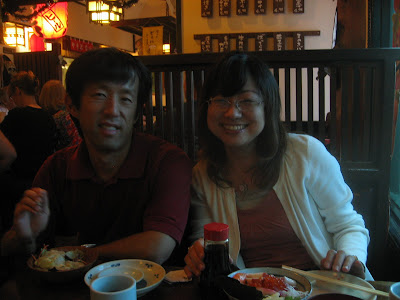 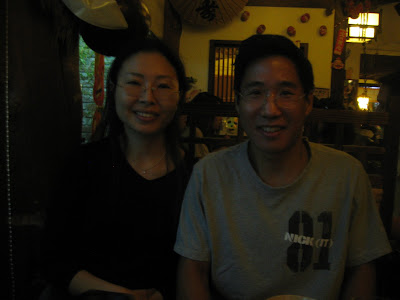 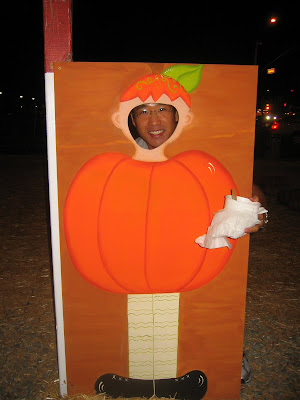 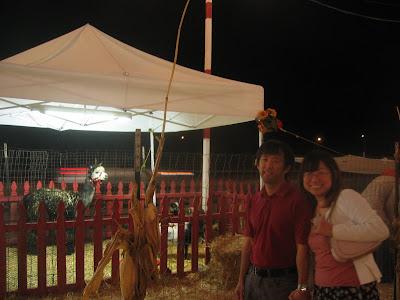 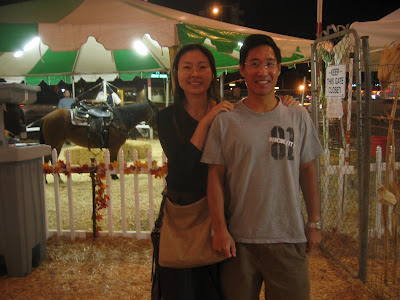 On Saturday, Sarah and I had dinner with Andy and Ayako. I haven't seen them since their wedding back in March. These days it's hard to meet up with friends since our schedules are so busy. We met at Honda Ya in Tustin. The food was good, but Japanese restaurants usually don't give enough food for me. I could eat those $6 sushi rolls in one bite. Afterward, we ate at Yogurtland. I liked the fact that you could make your own cup of frozen yogurt from the big variety of flavors they have. It's cheaper than Pink Berry's, but Sarah likes Pink Berry's better than Yogurt Land. Then, we went to a pumpkin patch and saw some farm animals. We went grocery shopping at the new Korean H Market and bought some food. Earlier that day we bought a lot of stuff, ran some errands, and bought an ottoman at a furniture store.
Posted by David Kim at 8:13 PM No comments: 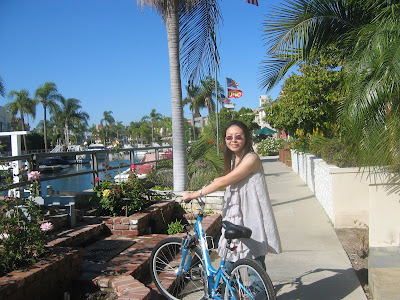 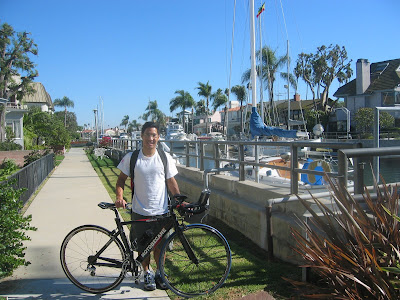 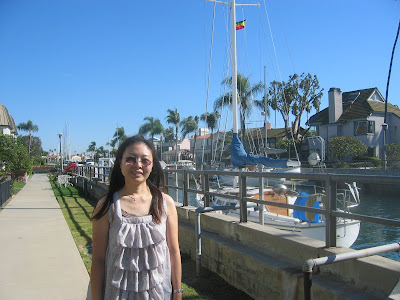 Sarah and I had a good time riding our bikes along the canals of Naples. It's quiet and peaceful there. It seems like a fairytale land with gondolas going by and wind chimes in the air.

I think it takes about a week to fully adjust to a new sleep schedule. I can't just go to sleep at 10:00 p.m. when I sleep later at 1:00 a.m. and expect to sleep soundly through the night.

Anyway, I ran 13 miles to church. It took me about 1 hour 45 minutes. Since I left a little early, I got there at 6:30 a.m. The church was locked, so I ran all the way to Whoony's house and ran back to church. I just got there a few seconds before they opened the door at 7:00 a.m. I ran almost 18 miles. After that, I was really tired. The last couple of miles really tired me out. I had blisters on my feet and sore muscles for a couple of days.

I need to start training for the L.A. Marathon and Triathlon for next year.
Posted by David Kim at 2:17 PM 2 comments:

It was a pretty cold Sunday morning when I started biking. I was just in my short sleeve jersey and short lycra shorts. I knew that I would start getting hot after biking for awhile so I didn't wear my long sleeve jersey. I had to spin really fast in order to increase my body temperature. It started at 6:00 a.m. so it was dark. One old guy fell when he either hit a pole or the curb when he was riding in a pack. He was crying out in pain. I wanted to stop and help him, but there was a woman who was already running out to help him. I think she was a volunteer. I'm sure she would have done a better job of assisting him than I could have.

There was a shorter Filipino rider who was really fast. All the tall riders seemed to be amazed at his speed. At the mile 25 mark, I started sprinting towards the finish. Unfortunately, that last mile seemed pretty long. I think I started sprinting too early. It was a 26.2 mile ride. There was still 0.2 miles to go and I got passed by the Filipino rider at the end. I almost ran into one of the volunteers at the Finish Line who was trying to slow me down as he was yelling at me "This is not a race!"

Thank you to Portia from her multi-award winning blog, Groove On.

She has passed on this lovely award to me. I only hope that I can live up to this award. Sometimes, I feel I am unworthy, especially since I don't like editing my work. I just like recording my thoughts and moving on to my next project.

I know that my blog is long overdue for a newer version. I've got to find something cool for the 4th anniversary of my blog which is coming in November.

or click on the link here:
Posted by David Kim at 8:15 PM No comments: 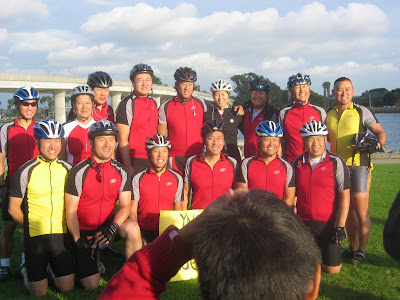 This past Saturday, I went with the Young Nak Cycling Team to San Diego. Personally, I think it was the most fun road bike ride ever. Cycling along the coast for 100 miles was really fun and the views were breathtaking. The YNC team had great support along the way. They had snacks, lunch, and dinner stops. There were 15 riders total. It was a charity ride raising money for the community around Young Nak Church. I'd totally like to ride there again. Sorry for the lack of updates these past few weeks, but I've been working non-stop. Some days I didn't even sleep. It was the toughest few weeks ever for me in terms of lack of sleep. I seemed to have gotten used to surviving on 3 hours of sleep a day. Other days were worse than some though.

Last Thursday, the Young Nak Cycling team had a carbo-load dinner at the Olive Garden to get ready for the ride to San Diego.

The riders were Joel, Joshua, Phil, Michelle, Yun Hui, Brian, George, Kirk, Tallis, John, Ken, Steve, John, Jay, and me. We also had delicious Hodad's $12 hamburgers at the end of the ride in Mission Bay, San Diego. I wish I took better pictures along the way, but I was biking too fast to be taking pictures.

Next time, I want to bike to San Diego and back to Los Angeles. That will make it over 265 miles round trip for me. I will have to make sure I bring enough drinks, money for food, and know the directions back home without getting lost at night. I'll also have to make it back to church at 7:00 a.m. the next day. Now that will be a challenge.

Sorry my post is all over the place. As you can tell, I don't like editing my posts. I just like recording my thoughts as fast as possible and then moving on to the next thing in my life. Although, I probably should work on my editing skills.
Posted by David Kim at 7:41 PM 2 comments: