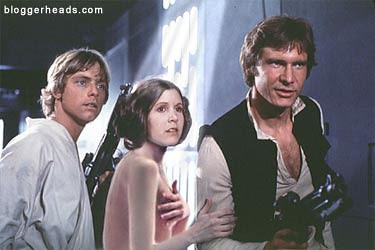 Read this news story that I've pasted below. You can also click the link on the title of this post. This is crazy. It's outrageous! It's nonsense. I have blood type-B. I think. Well, that's what I remember from high school biology class. That's the last time I checked my blood for what type it was. And I did it myself, so I may have made a mistake. But, anyway I think I'm type B. I don't think I'm bad at all. I think I'm a nice guy. Some people who believe in this stuff and totally ignorant. People need to study a lot more and not believe whatever they hear. There are so many superstitious and blindly religious people out there, it's scary.

Bad Days for South Korea's Type-B Men
Mon Apr 18, 8:14 AM ET
By Jon Herskovitz
SEOUL (Reuters) - Lee Sung-san is a 24-year-old South Korean student looking for love and hoping that the women he is wooing don't ask him for his blood type.

Genetics and pop culture have teamed up to make Lee's love life miserable. Lee is blood type B, which nudges him near to the nadir of the dating scene in South Korea.
"I have had women tell me flat out they don't date blood type B guys. They say we are selfish and hot-headed," Lee said.
South Korean magazines, TV shows and Internet chat rooms have been buzzing about blood types for years. But, these days, the subject of attention is just how difficult it is to strike up a relationship with type B men.
Scientists say there is no link between blood type and personality. But that hasn't stopped self-proclaimed experts from declaring, for example, that type-A women, with their shy ways, should avoid type-B men, who are likely to be cads.
Associating blood types with personality traits has been going on for decades in North Asia. Most of the original interest started in Japan early in the 20th century and it has also taken off in South Korea.
There are many characteristics associated with type-B people, but the bad rap going around about type-B men in Korea is that they are selfish, mercurial and absolutely useless as caring and devoted boyfriends.
Type-B women, on the other hand, seem to have escaped the wrath of pop culture.
Last fall, a song from singer Kim Hyun-jung called "Type-B Men" soared to the top of the charts. The song had lyrics that said type-B men are quick to get angry and quick to make up, but in the end, they will break your heart.
THE BLOOD TYPE OF BAD BOYS
Author Kim Nang has been ringing up steady sales of her book, "Dating a Type-B Man," in which she lays out strategies for women of various blood types to deal with the pitfalls and pleasures of striking up relationships with type-B men.
Another assault on pop culture came earlier this year with the release of the romantic comedy, "My Boyfriend is Type-B," which tells the frustrations of a type-A woman who falls in love with just such a man.
The man in the movie makes his girlfriend wait for hours in his car so that he doesn't have to pay for parking. On a date, his head is permanently swiveling to check out other women.
The movie, made for about $2.5 million, took in more than $10 million at the box office in South Korea and is to appear on Japanese screens later this year.
Director Choi Sukwon said he had first worked on a movie about blood types as a film student at New York University. He produced a short film that was well received and later returned to the subject for his feature in South Korea.
"Bashing is too harsh a word to describe what is happening to blood type-B men. For women they are seen as bad boys, but they are also appealing because they are charming and attractive," said Choi, himself a type-B man.
"Those traits make blood-type-B men notorious for girls in Korea. Girls all over the world want their men to be sensitive, to listen to what they need and what they feel," he said.

Choi said the more he investigated the subject of blood types, the more conflicting information he received.
BAD BLOOD, BAD MATCHES?
In Asia, the subject of linking blood types to personality took off with the 1927 publication of a series of articles by Japanese scholar Takeji Furukawa called "The Study of Temperament Through Blood Type."
The concept hit pop culture and mass media in 1971 when Japanese writer Masahiko Nomi expanded upon Furukawa's ideas and wrote "Understanding Compatibility from Blood Types."
Type-O people were described as outgoing, expressive and passionate. Type-A were considered introverted perfectionists while type-AB were an unpredictable, distant lot.
And then there was type-B. They were considered independent spirits with strong personalities.
Nomi's works and other similar books from Japan have been translated into Korean. At most major bookstores in Seoul, there are works from Japan on subjects such as how a type-A mother should raise a type-O son.
These days, South Korean women's magazines and Internet sites dedicated to trends seem to be fixated with the subject of romance with type-B men.
According to a recent nationwide survey conducted by Internet portal site xyinlove.co.kr, type-B men were considered to be the most difficult type to date and about 40 percent of women said they did not want to marry a type-B man.
The Internet message board at the blood clinic of Seoul University Hospital has postings such as one from a woman seeking medical advice to find out "if it is true that type-B men have more extramarital affairs than other blood types?"
Kim Tae-suk, a doctor in the department of psychiatry at the Catholic University of Korea, said younger Koreans were buying into defining people by blood types because of what they see on TV, movies and in print.
"I can definitively say there is no scientific evidence that links a person's blood type to their character," Kim said.
He added that every jilted lover should just calm down and stop blaming a break-up on a bad blood match.
Posted by David Kim at 3:09 PM 1 comment:

My Favorite Videogames of All-Time

Yo, peeps! Here's a list of some of my favorite games ever. The list of games is in no particular order. I just want to tell you about the games that I've liked. Hopefully, you've had the chance to experience euphoria from playing these games as well. Feel free to comment on them or tell me about your favorite games. Don't get mad if I left out your favorites. I might not have mentioned all the games that I've liked. I will make an updated list later. Videogames are the most fun things in the world.

Thanks for reading my list of favorite games so far. I'll update the list with more games as I remember them and play more games in the near future like Final Fantasy XII.

Videogames are pretty much the only thing I'm good at. I think I'm going to open up my own videogame store one day. I have some good ideas.

I also want to have my own videogame company. I'm thinking about making a company that will create virtual reality goggles. Instead of looking at a computer screen or tv, you see the game through the VR goggles. You'll be fully immersed in another world. Cool, eh?
Posted by David Kim at 9:38 AM No comments: 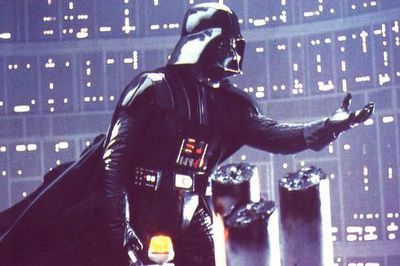 "Luke, I have a big surprise for you. You're not going to believe it, but I'm your mother." "NO!!!!!!!!!!!" I am a star wars fanatic. I'm preparing myself for the final Star Wars movie, Revenge of the Sith. I want to dress up as one of the Star Wars characters and see the first screening carrying my lightsaber. Maybe I'll have Sarah dress up as Queen Amidala. 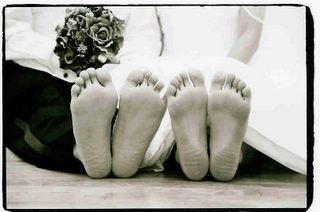 Trick or treat, smell our feet. Give us something good to eat. 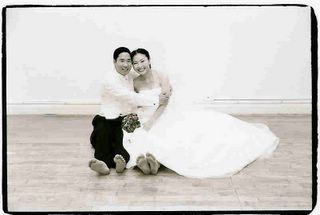 I'm sorry about the images not coming out so clearly. I think the actual pictures themselves came out well. I blame the lower resolution on the computer. I wanted to make them higher rez, but I don't know how. 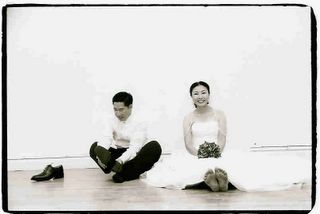 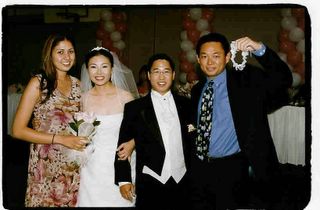 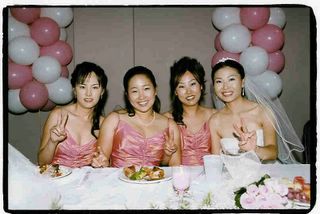 The bride and bridesmaids. 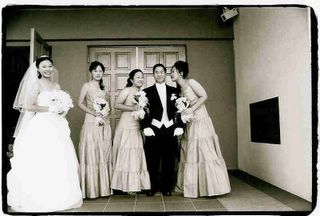 Here's a funny picture. I don't know what kind of pose the photographer was thinking of. 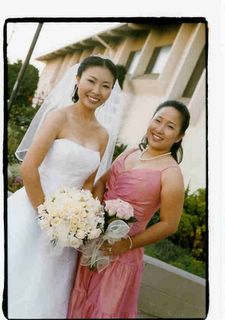 Sarah and my sister, Christine. 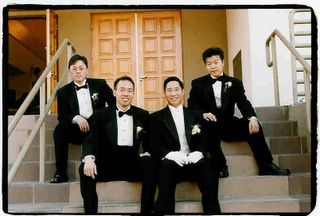 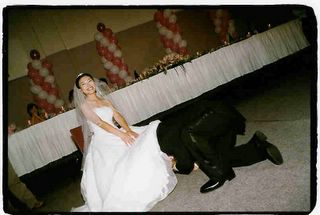 Don't ask about what's going on in this picture. 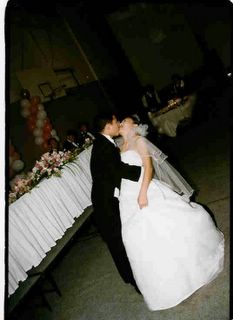 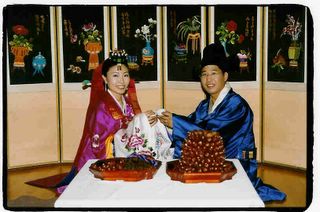 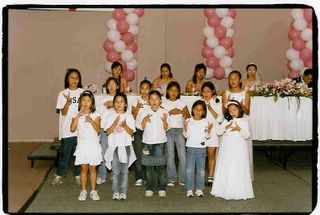 The Sunday School Body Worship Team performing at our wedding. 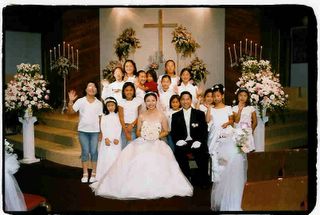 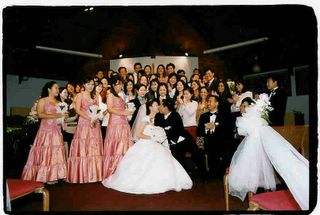 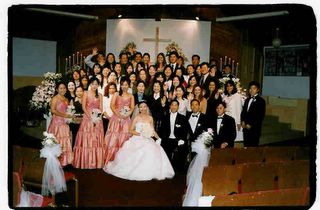 Our friends at our wedding. 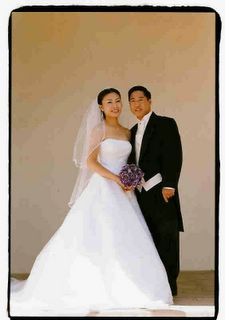 If you haven't guessed already. All these pictures are of Sarah and me. 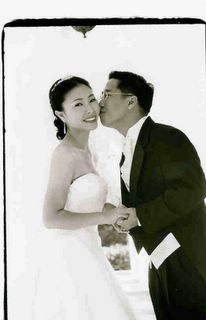 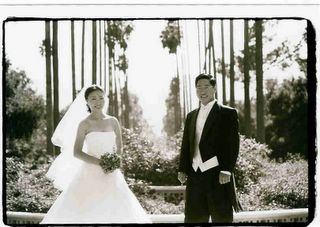 Sarah and I again. 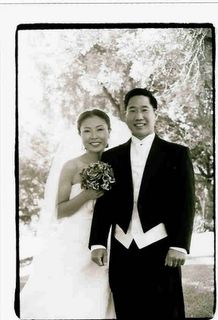 We're happy. I know I am. I feel like I'm married to Miss Korea. 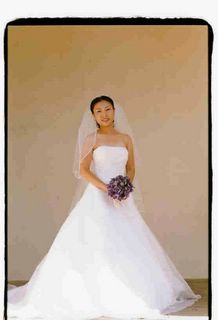 Here's Sarah looking at me. 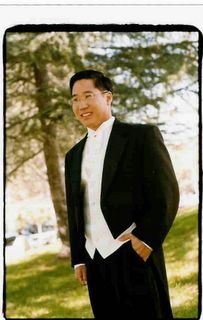 Here's me looking at Sarah. 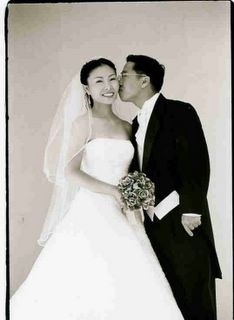 Here are some wedding photos taken by Sky Photography. 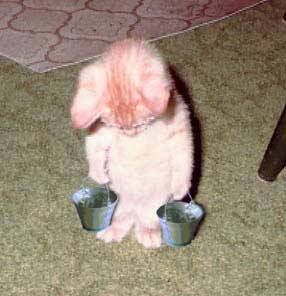 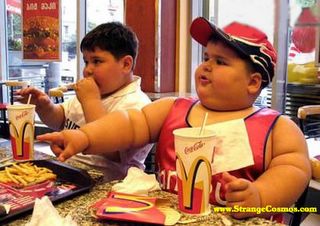