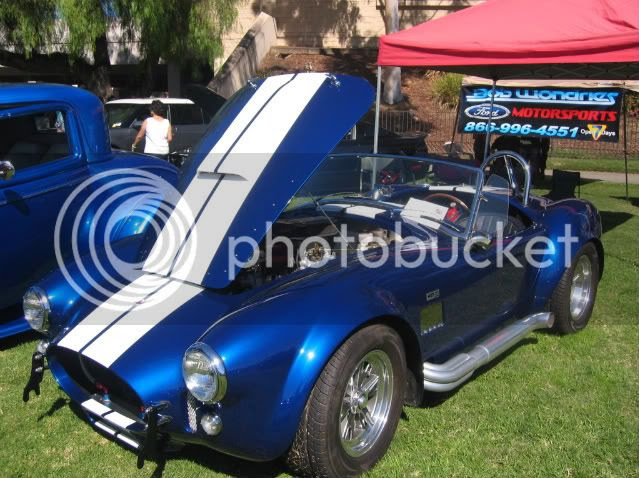 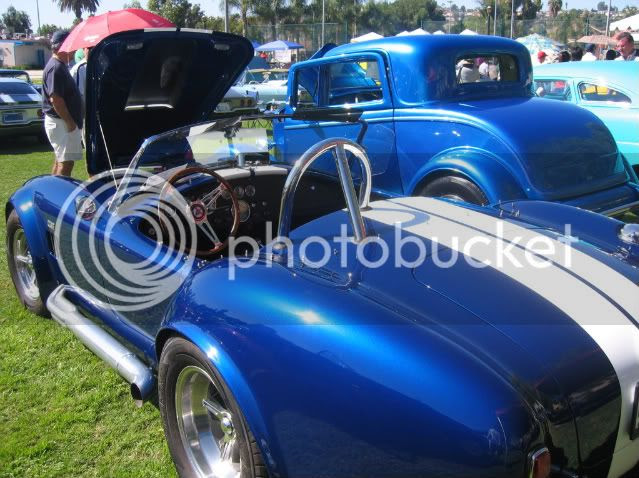 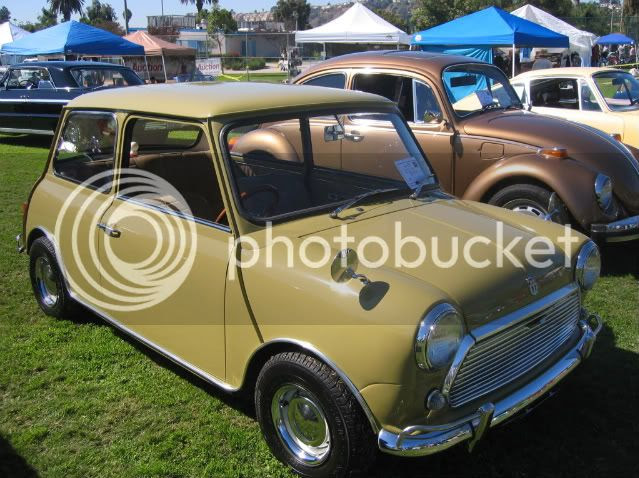 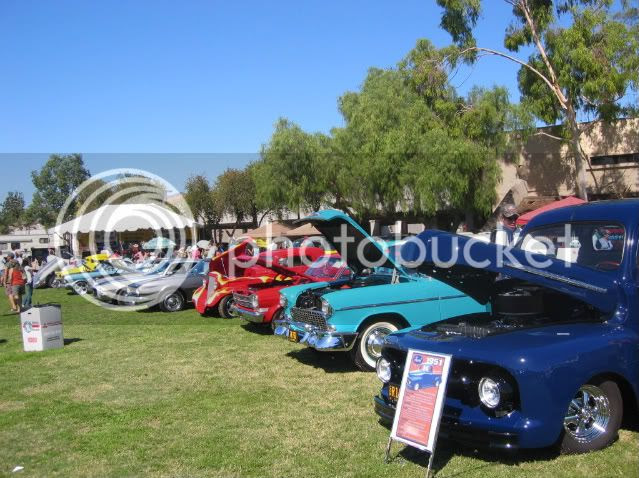 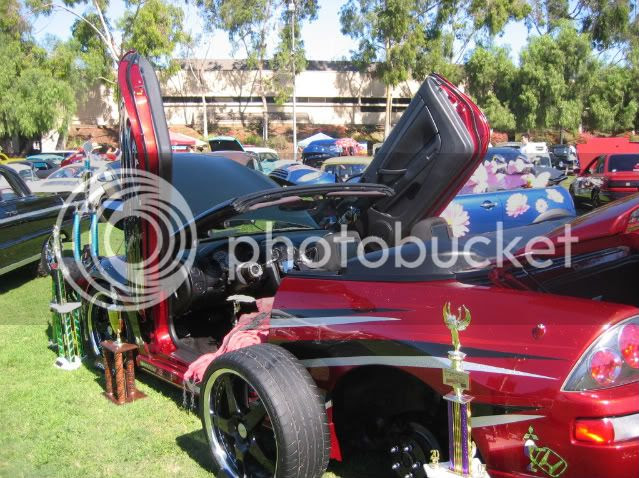 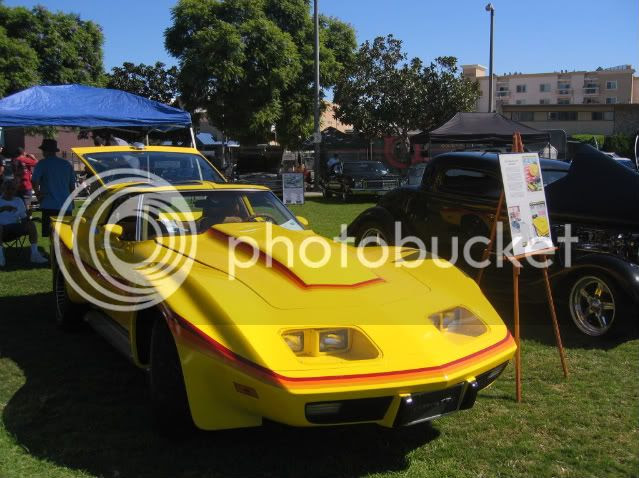 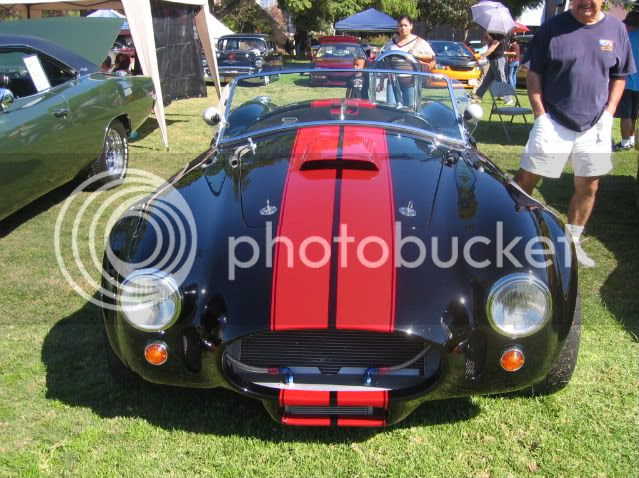 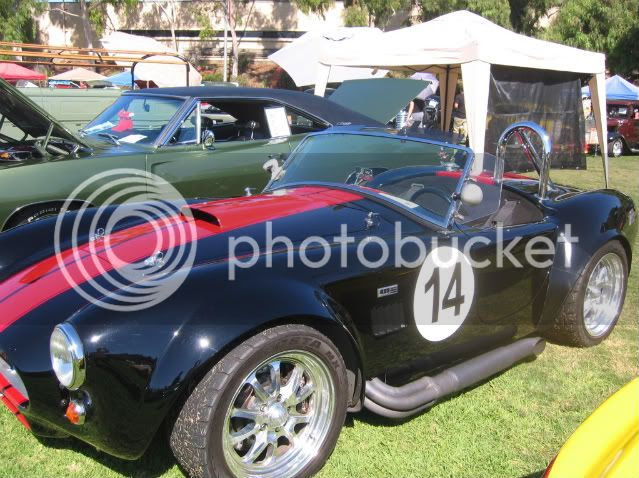 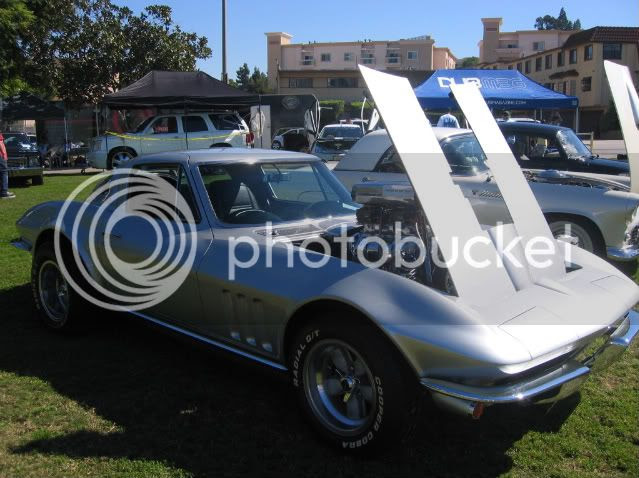 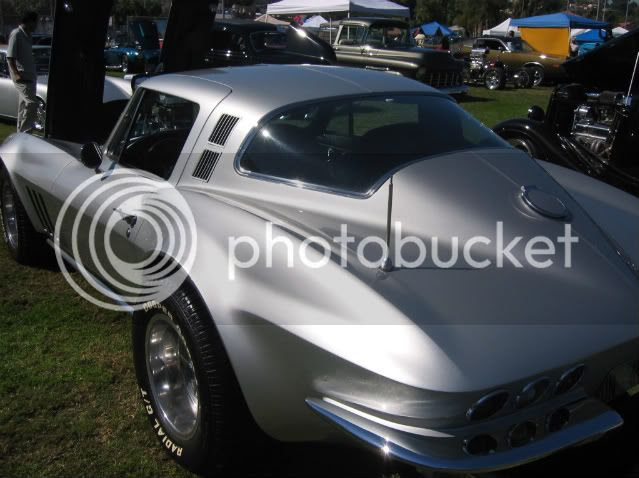 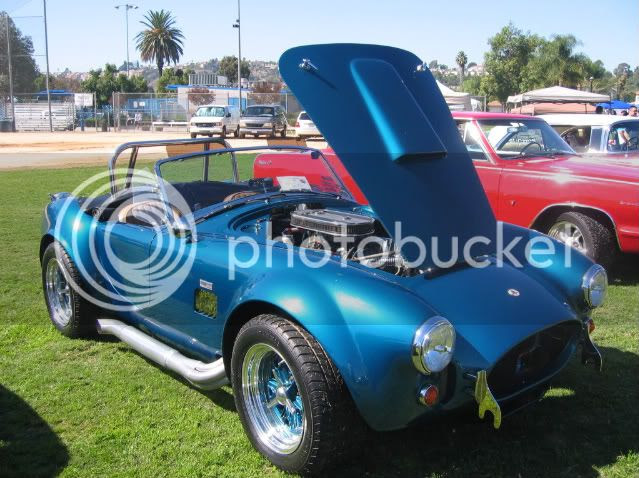 A few pictures from a local classic car show. I took a lot of pictures. I might post some more up if the demand is there. My favorite cars are the Shelby Cobras. Many of them are worth well over $1 million dollars. The most expense car ever sold was a 1966 Shelby Cobra that auctioned for $5.5 million dollars.
Posted by David Kim at 8:38 PM 1 comment:

This past Sunday, I did the Playa del Rey Tri. I biked 30 miles to get there in the morning. My total mileage for the day was 76 miles. I tried not to tire myself out too much before the race. Then, I did the bike portion of the race in 32 minutes (20K or 12.4 miles). The course was pretty flat and fast. It was a relatively short course. It was more of a sprint tri than an Olympic distance tri. I got my fastest average ever for a race (almost 22 mph). That was pretty good for biking 30 miles before the race. My endurance is getting better. It felt great passing over a dozen racers on my bike one by one. I did get passed by couple of guys at the end. They were illegally drafting one another though. They should have been penalized if they got caught.

I think I'm getting faster with each race. Unfortunately, my wife wants me to stop doing triathlons so that I can be with her during the 8:00 a.m. service at church. So that's basically the end of my triathlon season for this year. I may be doing fewer races next year. She has to go to the first service so that she can go back to work at her pharmacy right after.

Last Friday, a car ran a red light trying to make a left turn and almost hit me. That scared the living daylights out of me. The car wasn't even at the line when he tried to turn. He was speeding up from way back and totally made a late left turn at the red light. I just barely made it out of his path. That was one of closest calls in a long time. Damn these stupid drivers!

It's always dangerous biking around all these idiotic drivers. I wish they would come to a complete stop before they make a right turn. They keep inching up coming close to me before I cross their path. Drivers should also be careful making left turns from the opposite side. They don't seem to just by speed accurately. I'm going over 30 mph on certain flat sections. Don't turn left until I cross! Geez! I hate jerks that intentionally try to scare me with their cars too.

I got hit a few times by drivers who made left and right turns without looking carefully. Every day I put my life in the hands of other people. It's scary but somehow it gives me a rush when I survive near-death experiences. It's like the Running of the Bulls in Pamplona, Spain.

Drivers shouldn't squeeze by me in the same lane. It's not hard to pass going into the next lane. Bikes can take the entire lane if it's not safe for cars and bikes to share one lane. And don't honk at me either. Don't speed by me closely. You wouldn't drive like that around your kids if they were on bikes. Give bikes plenty of space when you pass. Sometimes they have to avoid things on the road so they might have to make evasive maneuvers.

Okay, enough of my ranting about dangerous drivers. On a brighter note, usually drivers only have rude things to yell out at me. It's memorable when they compliment me. When I was biking home a couple of weeks ago, one driver yelled out, "Hey, how do I get legs like that?!" I told him to bike a lot and do pylometrics.
Posted by David Kim at 8:20 AM 2 comments:

This weekend, I did the Magic Mountain Man Triathlon and the Long Beach Bike Tour. It was the toughest race weekend ever for me, because of the Magic Mountain Man Triathlon. It was a half-Ironman distance tri. The bike course was 56 miles in the mountains near Castaic Lake. I had to bike to the start of the bike course, because I had no support. I had to get there by myself so I had to bike an extra 13 miles. 6 of those miles was because I kinda got lost. I didn't know why the route I took didn't connect with the road I was supposed to take. It was cold there too. My fingers, feet, and nose were numb.

The Magic Mountain Man Tri was absolutely brutal, because half the course was climbing up steep mountain roads. It felt like the whole course was uphill. Even the downhills were hard, because the road going into the canyon was so bumpy. That was the first time I ever wanted the downhill portion to end in my life! My arms and hands were getting weak from going down that rough road.

I did well going uphill and passed everyone since I started out near the back of the pack. However, I used up all the glycogen stores in my muscles and started getting really weak. Even going downhill in the last 10 miles was tough since I had no energy left. I got passed by two downhill specialists. When I tried to lay the hammer down, my muscles started cramping up. I was done for the day. I didn't do the run, because I had to save some energy for Sunday's 26.2 mile ride the next day. I finished the bike course in 3 hours and 9 minutes.

Sunday, I went to Long Beach and did the ride there. There was so much traffic on the 710 Freeway since so many people were trying to get there because of the ride and the marathon that I started 15 minutes late. The swarms of cyclists slowed me down, but I finished the course in 1 hr 19 min. I thought that was good since I was slowed down considerably by all the slowpokes in front of me. After getting about half way through, the roads started getting a little bit more opened up and then I could time-trial. One rider I passed was sucking my wheel for about 10 miles, but I finally dropped him in the last 6 miles. He really wore me out, but I kept pushing myself since I hate getting passed. I drove home and then biked 14 miles to church before 9:30 a.m.

I am so tired and weak now. I need to taper my exercises to get some rest. Although I have a lot more work to do before I get ready for the full Ironman race.
Posted by David Kim at 8:01 AM 7 comments:

I did the bike portion of the L.A. Triathlon on Sunday.

Am I the only fool that bikes to the bike races? I biked 28 miles in 1 hr and 30 min to get to the race that started in Venice Beach. Just waking up early to ride on the closed-off road course was worth it. It was a cyclist's dream: no cars (almost), blocked off intersections, and not having to stop at intersections. It was a major pain in the ass for most of the people at church since the road to church was blocked off.

I did the 24 mile bike race in 1 hr 22 min. That's not too bad since I biked 28 miles to get there. I felt my legs getting sore after I tried to pedal hard.

Then, I hurried to get to church to teach Sunday School.

On Saturday, I did the L.A. Heartwalk in Pasadena at the Rose Bowl. It was only a 5-walk. I did get a lot of goodies afterward though. Unlike the other events I went to on Sunday mornings, I got to spend some time at the celebrations afterward. I usually have to take off to church right after I finish so I don't really get to hang out and enjoy the finish line festivities. Sometimes, I have to take off early if I'm running too late.
Posted by David Kim at 8:28 AM No comments: 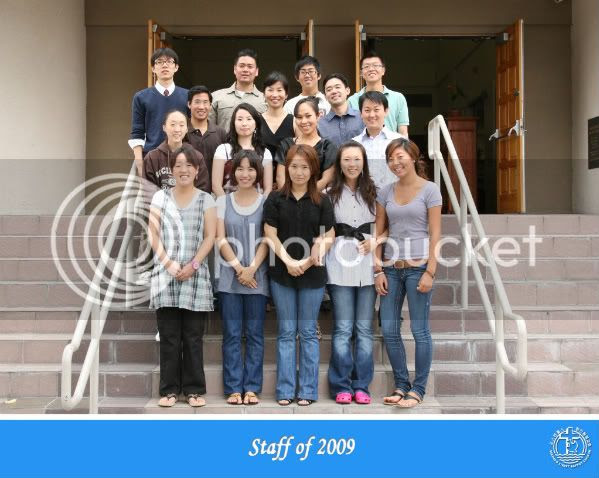 John Moon and Eun Jung Moon were not present for the photos during picture day.

Special thanks to Jay for taking the great photos.

We've got a wonderful group of dedicated teachers this year.
Posted by David Kim at 10:31 PM 2 comments: 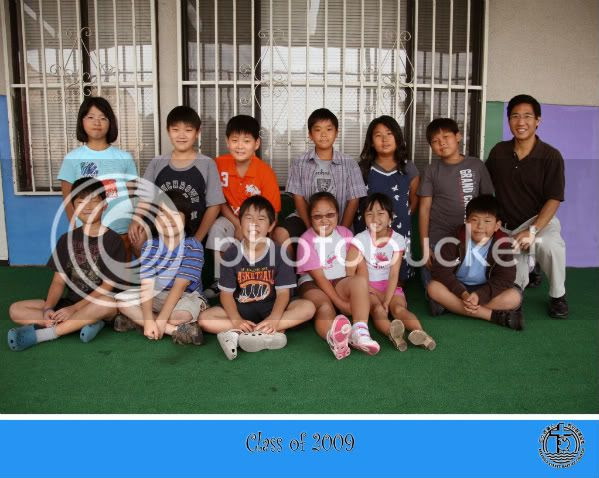 David and Eun Jung Moon (not present for photo day) Teachers
Posted by David Kim at 10:28 PM No comments: 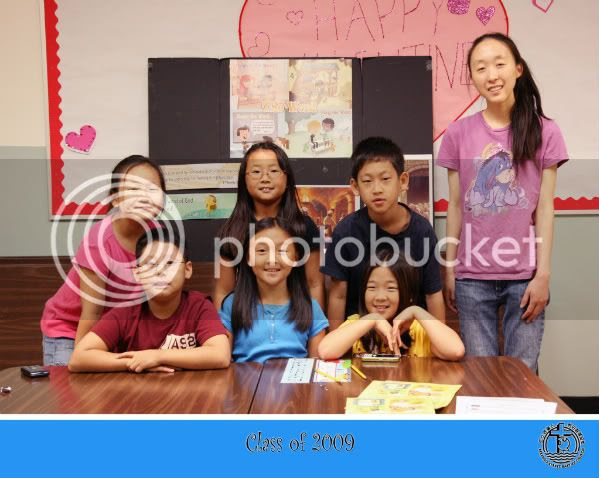 Sharon Teacher
Posted by David Kim at 10:26 PM No comments: 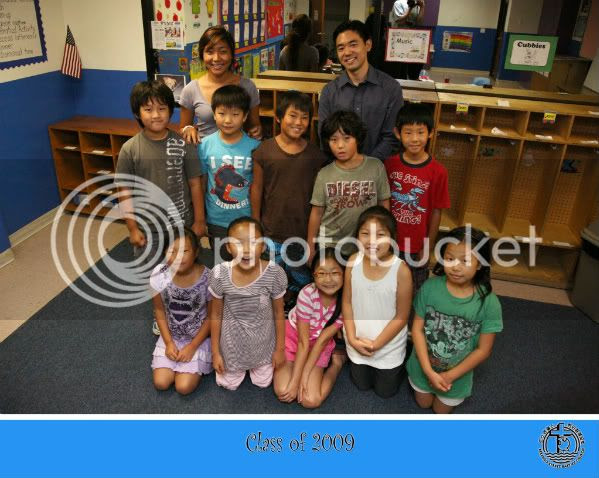 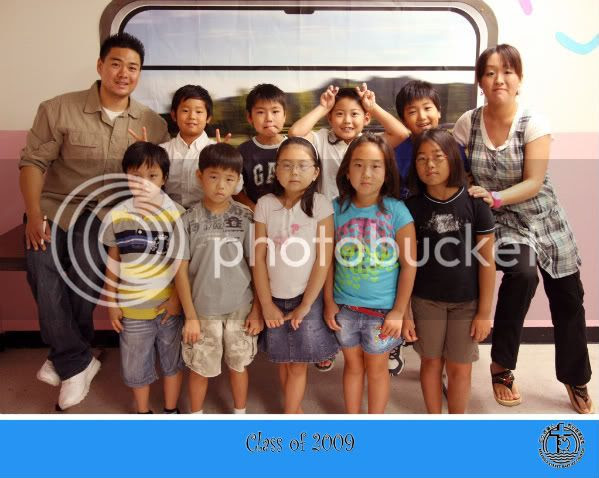 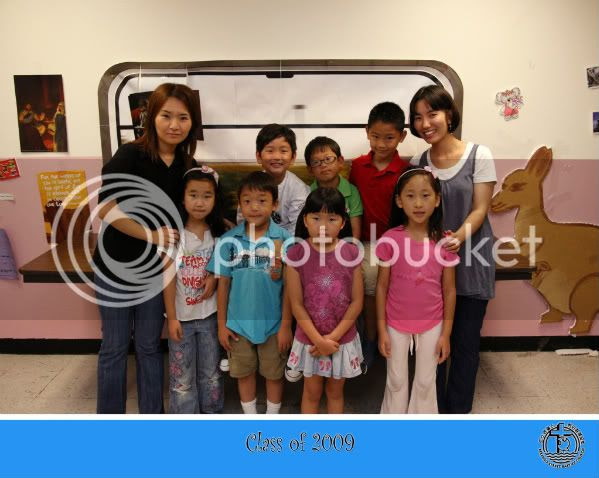 Grace and Joy Teachers
Posted by David Kim at 10:17 PM No comments: 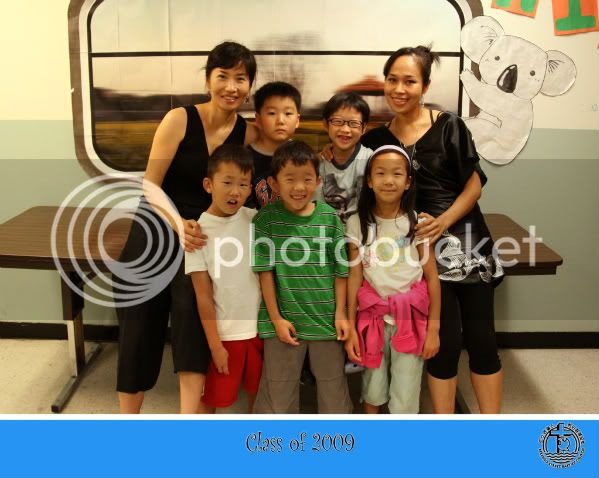 My nephew, Mikey, is in that class!
Posted by David Kim at 10:15 PM No comments: 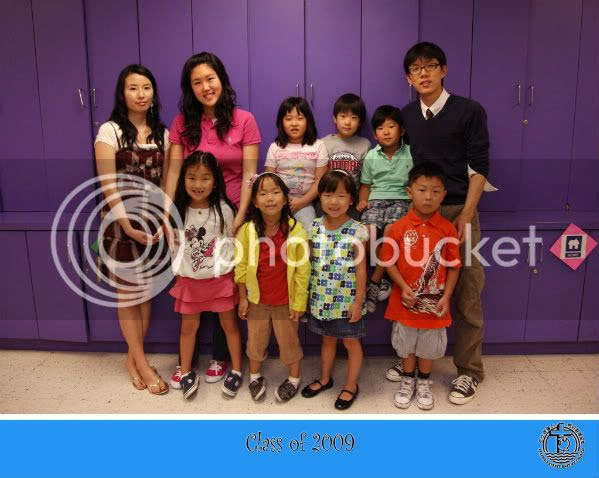 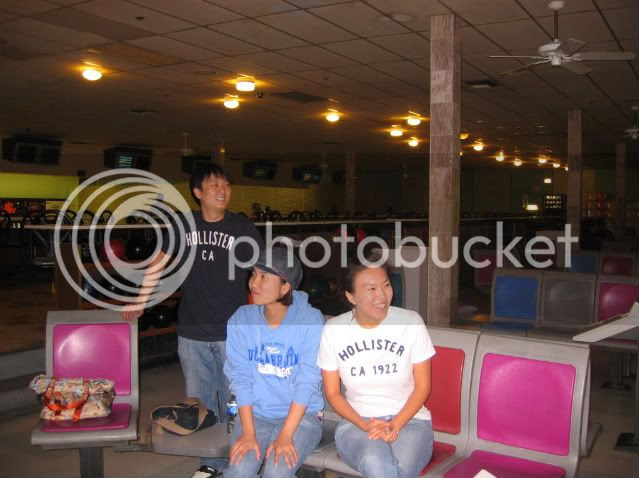 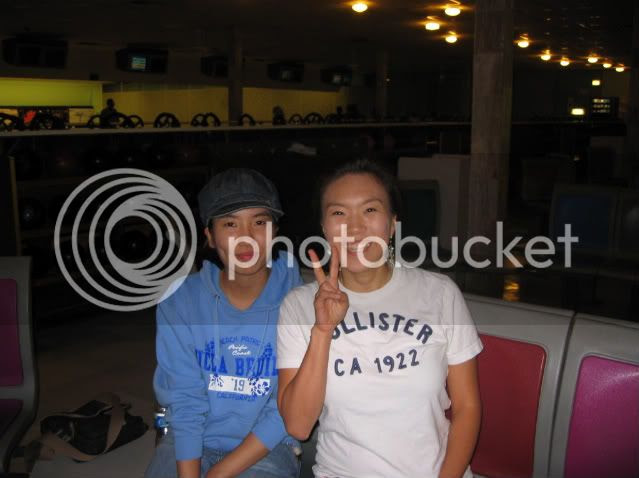 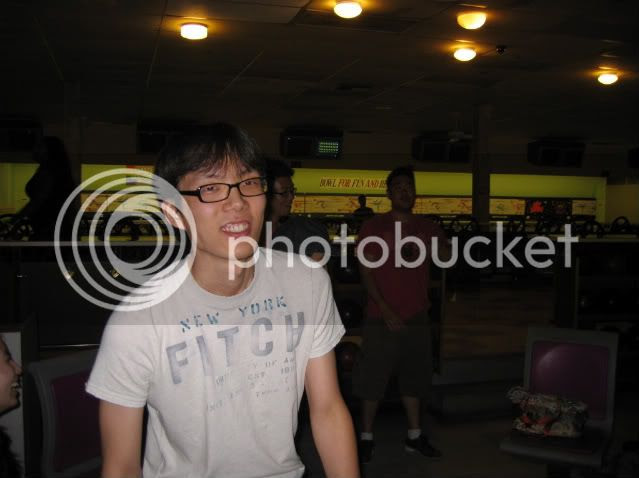 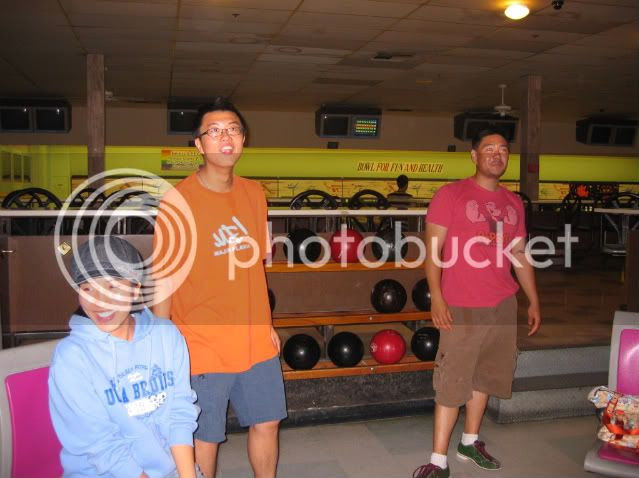 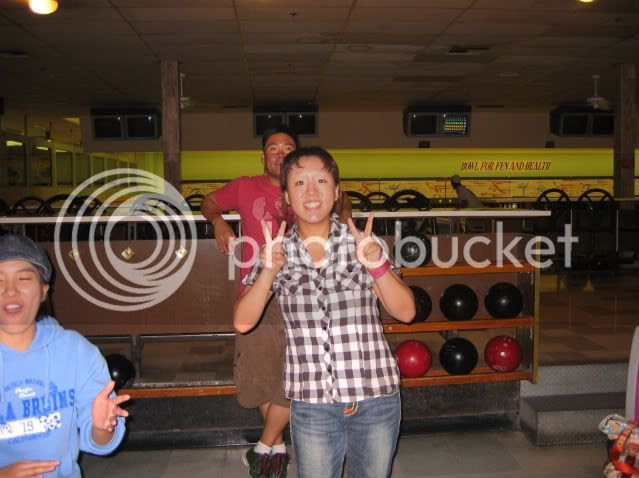 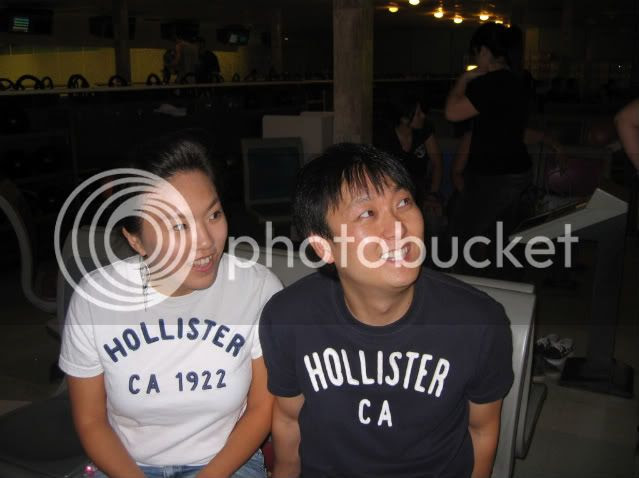 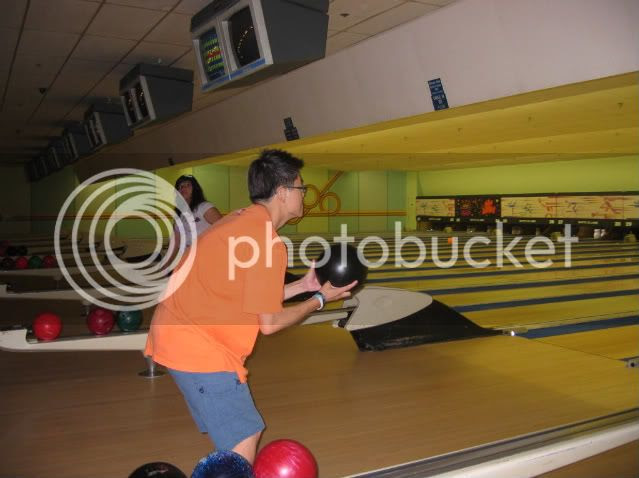 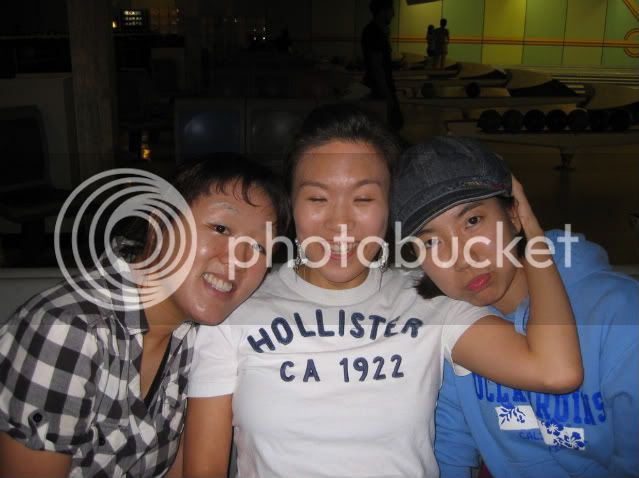 Last Saturday, the Sunday School teachers went bowling after having a delicious all-you-can-eat Korean BBQ dinner. I ate a ton of food. I was stuffed, but I still wanted to eat, because it was so good. In times like these I want a bigger stomach. I've been trying to shrink my stomach so I can get a 6-pack. I do have one, but it's wrapped up underneath my party ball pot belly.

James, Irene (Hee-Jin), Grace Lee, Jimmy, Ryan, David Choi, Jiyeon (Katie), Miju (Miriam), and I went. I know these aren't the best photos. I was too tired to care about retaking them.

I never want to go bowling again since I got my lowest score ever. I just don't have time to dedicate to bowling right now.

We went to eat Pinkberry frozen yogurt in Larchmont afterwards. I was already tired from helping my sister move and swimming and a busy few months and lack of sleep. I then biked home and got home before midnight and went to sleep at 1:00 a.m. I woke up at 4:30 a.m. to drive down to Mission Viejo for the O.C. Triathlon.

I'm still exhausted. I have about a dozen or so events and races left this year. I need to make some time to get some sleep.....
Posted by David Kim at 9:57 PM No comments: