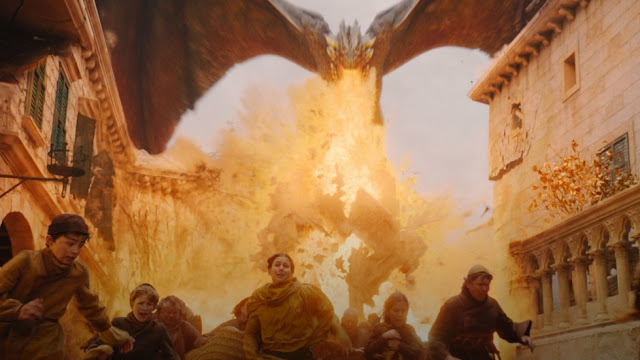 Someone forgot to tell Dany that when Missandei said, "Dracarys!" before she got her head chopped off in Episode 4, she didn't mean burn the whole damn city down! Dang! It was a visually stunning episode seeing Drogon the Dragon destroy everything. It seemed that Drogon had infinite fire breathing power as he kept blowing up everything with fire. I was disappointed to see Dany turn into the Mad Queen so quickly. She was supposed to be the Saviour! I think they should have spent more time showing how she became crazy instead of just saying that she finally snapped at the end with all her closest friends dying and nobody loving her as much as they did "Know-Nothing" Jon Snow. She said she was the freer of chains. Now, she killed innocent women and children. What was she thinking?! Obviously she wasn't thinking of the consequences. You can't expect people to not try and assassinate you if you burned thousands of people alive. I think Arya is going to try and kill Dany in the final episode. She had the look on her face.
Posted by David Kim at 6:51 PM