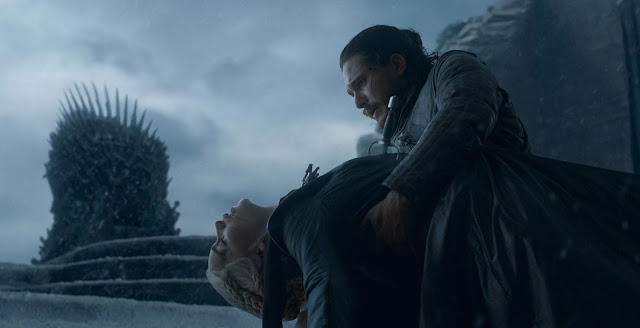 Well Game of Thrones has finally ended and it has been a great ride. GoT was the best TV show ever!  Okay, the last two seasons haven't been as great as the first 6 seasons, but it was still probably better than most of the other shows out there.

I don't think anyone thought that Jon Snow would end up killing Dany or that Bran would end up being King before Season 8 started.

Dany was supposed to be the Breaker of Chains. Everyone looked up to her as Khaleesi. Even though there were signs pointing to her going this way, I still think that it was a little too rushed. I thought that Dany would use her dragons in battle at King's Landing ever since she got her dragons and started amassing her army of the Unsullied and the Dothraki. I didn't think she would turn into the Mad Queen and totally destroy the city full of innocent women and children. Her dragon basically destroyed the entire city. She didn't even need her 2 armies. She and Drogon basically destroyed the entire city by herself. I thought that she was only going to destroy Cercei's army. However, she just snapped and started destroying the entire city after the bells rang.

In the final episode, it seemed like she still wanted to make the world a better place. She wanted to destroy all the evil people and let people be free. However, it had to be her way and what she thought was right. Nobody else had a say in it. Still, I thought it was too soon for Jon to kill her. Maybe she could have made a better world. She did kill thousands of innocent people in King's Landing. Maybe she would have only killed the evil slavers in other cities like in the previous episodes. Now that Jon just straight up murdered his lover and aunt, we will never know.

Bran could end up being a good king. He is the Three-Eyed Raven. He does seem to be wise and all knowing. He could see the future and warg himself into different animals to see what's happening in the world.

Jon could have been a good king too. With most of the worst enemies gone, he could have ruled the kingdom peacefully since he was a good guy.

Tyrion could have been a good king too. He was smart and did seem to have the best interests of the people in mind.

It's hard to make a tv show that has a good ending that will satisfy most people. Not many shows have had great endings. Shows like Lost and Battlestar Galactica were awesome, but the endings ruined it for a lot of people. The shows just built up so much expectation in peoples' minds that if the endings didn't have mind-blowing endings, people would end up disappointed.

GoT's ending seemed to be fitting for the most part. GoT wasn't about happy endings so we knew it wasn't going to be a totally feel good story.

I don't know if I can keep up with the 3 or so spinoff shows that are planned later. That seems to be too much tv for me. We'll see how good they turn out.
Posted by David Kim at 2:24 PM