The other day I was cycling to Pasadena when I fell off my bike at high speed. I was going 35 mph+ downhill in Pasadena when a red pickup truck approaching from the other side tried to make a left turn in front of me. I swerved to the right and lost control of my bike. My front wheel started skidding and I fishtailed. I slid on my left arm the most and got really bad road rash. I got scrapes on my right arm, right knee, and left knee too, but my left arm is the worst. My bike's handlebar is scraped up and I should replace it. I just rewrapped it with handlebar tape. My bike seat is shredded. My bike pedals and rear wheel skewer is also scraped up. My backpack has holes in it now. My bike lycra shorts were shredded to bits. My watch was also scratched.

I had to bike back home quarter-naked, because my lycra shorts were shredded to bits on the left side.

A nurse who was walking by witnessed it and stopped the pickup truck from leaving. I was shook up and didn't know what happened. I was most worried about my bike. Since I could ride it back home, and I didn't get any broken bones, I let the driver off the hook. I didn't pursue any claims against him since he didn't hit me. Drivers should be careful when making left turns, especially because bicycles can be approaching at high speeds behind a car. Drivers just don't seem to know how fast bikes can be.

I'm still in pain due to the road rash. It hurts the most when I put antiseptic cleansers on it. I can't help but scream out in pain when I put that stuff on since it hurts so bad.

I just don't want to get an infection. I really hope that it doesn't leave a permanent scar. My arm looks horrible.

For some reason I do feel stronger after the accident because I survived a speed fall with just road rash. I hope I don't fall or get hit again for the rest of my life. Last time I got hit by a car in a similar situation where the driver was making a left turn, because she didn't see me due to her inattention. 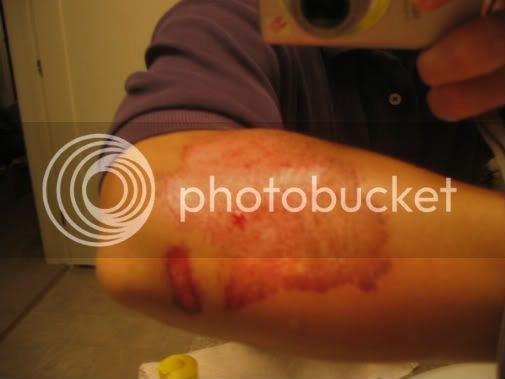 looks bad. What street can you go 35 in pasadena? such a speed freak. Be careful.

Yikes, yes drivers please watch out for us bicyclists. You have a great attitude, keep on biking.

yeah, infection. You really should see a doc. Glad you survived it with no broken bones or concussion.

hai.. have a nice blog..
iam from Indonesia..